UK Mail’s new automated hub is now operating well with high service levels, the company said when it released its results for the year to 31st March. 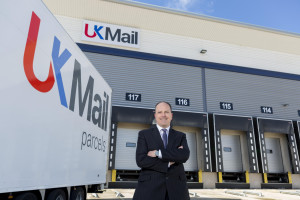 Problems with the operations at the new Ryton hub hit profits last year and resulted in CEO Guy Buswell stepping down in November.

“The efficiency of the main hub will also improve as new customers come on board thereby increasing volume throughput, with some of that new volume arriving at the new hub throughout the day rather than just in the peak hours.”

The group said revenue for the year was down 0.8 per cent on last year at £481.0 million. Operating profit before exceptional items was £11.2m, down from £21.0m the year before.

Exceptional items included £16.5m in compensation for being displaced by HS2 but this was offset by hub relocation costs of £7.1m.

Revenue in the parcels business, which represents 52 per cent of group revenues, rose 1.4 per cent. This was on the back of average daily volume growth of 4.5 per cent.

Revenue was down 3.1 per cent in the Mail business, which accounts for the other 48 per cent of group revenues. However, volumes were up 5.2 per cent, against a background of an overall decline of 3 per cent in the mail market.

Chairman Peter Kane said: “Last year was a challenging one but we have made good progress in implementing a detailed plan to address the issues we faced in transitioning to our new automated hub. The hub is now operating very well and achieving good throughput levels, having recently processed its 30 millionth parcel, with consistently high service levels in both Parcels and Mail in recent months. The strategic rationale for the investments we have made remains compelling, and sets us up well for the next stage of profitable growth.”