Volvo is taking part in the European Truck Platooning Challenge, in which three Volvo trucks will be communicating wirelessly and driving closely behind one another in a Platoon. The challenge, initiated by the Dutch Presidency of the EU, aims to move a step closer to the introduction of platooning (aligning driverless trucks on the road), in Europe. 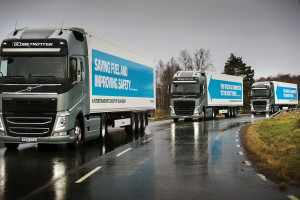 According to Volvo, when trucks drive closely behind one another, fuel economy is improved because of the reduction in drag. This is because by using wireless technology, the trucks can driver with as little as a one-second gap between the vehicles – by ‘communicating with each other, the trucks automatically match each other’s speed and braking’.

“Essentially, this means that the reaction time for braking is reduced to zero, which in turn improves safety and minimises the ‘accordion effect’ in connection with traffic congestion,” says Anders Kellström, project manager for Volvo’s participation in the EU Truck Platooning Challenge.

“We believe that platooning offers major advantages, mainly for our customers, but also for society in general in the form of fuel savings, reduced emissions and enhanced transport efficiency. Together with the rest of society, the transport industry needs to tackle such challenges as the harmonisation of legislation and in so doing promote the introduction of platooning in Europe.”