DX Group said it has returned to pre-tax profitability as its post-Covid-19 volumes continued to rise, boosted by an increase in B2C volumes.

The express courier had previously reported a return to operating profit in September of last year, but turnover had rebounded despite the impact of Covid-19.

DX said its £10 million capital investment programme, to be completed over the course of financial year 2020 and 2021, is progressing as planned. This has already seen it invest in new handheld devices and expand in East Anglia. 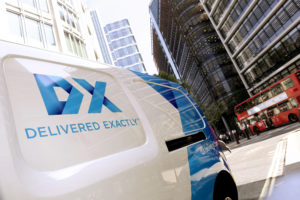 DX Express presses ahead with “big ticket” investments in network

DX said that since May, trading in its freight and express divisions had continued to improve, and group revenue for June was only 3% below previous forecast levels (that were set prior to the Covid-19 pandemic).

It said that this improved performance across both divisions mainly reflected recovery in volumes from existing customers but also some new business wins.

DX chairman Ronald Series said: “Having launched our turnaround plan two and a half years ago, we are delighted to report the company’s expected return to adjusted pre-tax profit. It demonstrates the hard work, expertise and resilience of our people. We have a clear vision for ongoing growth and remain wholly focused on the next stage of the company’s development.”

Liad Meidar, managing partner at Gatemore Capital Management, the largest shareholder in DX Group, said: “We are pleased to see continued improvement at DX. This represents the first full-year profit since the current management team was installed, demonstrating the expertise of DX’s people and the successful completion of the turnaround plan, despite the disruption caused by Covid-19. As long-term investors in DX, we look forward to the company’s continued earnings growth in the coming years.”

Full year results will be announced in late September.