Dematic, which was bought by Kion Group last year, is to integrate sister company Egemin Automation into its organisation, with the aim of creating the world’s largest supplier of automated guided vehicles. 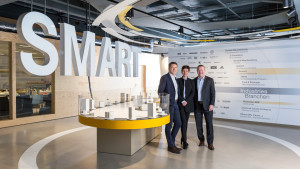 It aims to complete the integration by the end of 2017.

In the first of two integration moves, Dematic will create a “Mobile Automation Centre of Excellence” which will combine the AGV products of Dematic, Egemin, and NDC, the recent acquisition in Australia.

This will be headquartered in Holland, Michigan, current home of Egemin’s North American operations, under the leadership of Tom Kaminski, former chief executive of Egemin NA. It will also include Egemin’s in-floor chain conveyor (E’tow) offerings.

In the second integration move, Egemin’s warehouse automation activities (E’wds) will continue to be located in Zwijndrecht, Belgium and will be integrated into the Dematic Central Europe organisation, reporting to Barbara Wladarz, managing director, Central Europe.

Jeff Moss, Dematic International chief executive, said: “As a member of the KION Group, Dematic and Egemin Automation will leverage KION’s leading market position and continued investment in forklift technology to offer an unprecedented level of expertise, technology and world-class manufacturing to customers. By combining three great brands, the Dematic Mobile Automation business is now effectively the world’s leading provider of innovative AGV and warehouse technologies that will optimise the supply chain.”