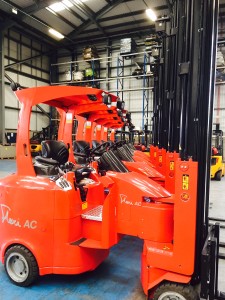 The fleet expansion follows the company’s extension of its warehouse and head office facility in Bradford. The company chose to maximise the additional space by specifying a narrow aisle storage system based on Flexi’s trucks.

“We needed trucks that would allow us to optimise storage density while at the same time permit fast and efficient individual pallet accessibility – which can become a problem with many other truck-based high density storage systems,” said Expect Distribution’s storage warehouse manager, Chris Ramsden. “Having operated Flexi trucks for a number of years, we were in no doubt that Flexi articulated forklift truck technology represented the best materials handling solution for us.”