The first container train from China to the UK has arrived at DB Cargo UK’s London terminal in Barking. 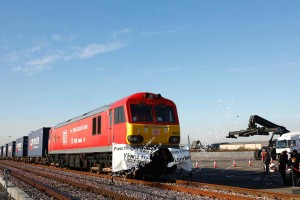 The train, operated by the InterRail Group, took 18 days to make the 12,000 km journey loaded with textiles and consumer goods – about half the time of transport by sea.

The train originated in Yiwu in the eastern Chinese province of Zhejiang. DB Cargo is responsible for the section from Duisburg to London via the Channel Tunnel. The 34’x40’ containers required specifically for the UK were loaded on to Deutsche Bahn’s container platforms at the Duisburg container terminal, which are specially approved for the Channel Tunnel.

The 10,000 to 12,000 kilometre journeys usually take 12 to 16 days and require containers to be unloaded and reloaded multiple times due to changes of gauge. The service is used in particular by customers with time-sensitive commodities, including special promotional clothing items, and capital-intensive goods, such as automotive parts and electronics.