Ford has unveiled a range of Transit vans powered by a new 2.0-litre EcoBlue diesel engine at The Commercial Vehicle Show in Birmingham. 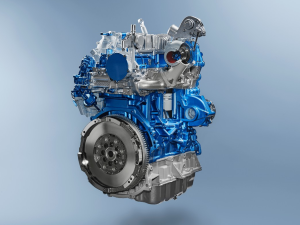 It reckons that the EcoBlue engine enhances fuel efficiency by up to 13 per cent compared with the outgoing 2.2-litre TDCi engine.

“The challenge was to take our best-selling Transit and make it cheaper to operate, improve performance, cleaner in terms of emissions, quieter in the cabin, safer and even more durable,” said Pete Reyes, Ford of Europe’s head of commercial vehicles. “That’s exactly what we did with the new Transit and Transit Custom with the all-new Ford EcoBlue engine.”

The Transit and Transit Custom models are offered in 105 PS, 130 PS and 170 PS power ratings, each of which offers increased power and torque compared to the outgoing 2.2-litre engine. Ford says it has also improved the low-end pulling power – with 20 per cent more torque at 1,250 rpm.