Asda has opened the doors to its new £100m automated distribution centre in Warrington, with an official visit by Prince Andrew.

The warehouse is 97 per cent automated, with 600 employees working alongside robotic technology.

The site processes around four million cases a week, and serves 140 stores in the North of England and elsewhere, including: including Manchester, Liverpool, Cheshire, Lancashire and North Wales.

The automated nature of the facility means that it is also one of the most ergonomically friendly distribution centres in Europe, as staff have standing work stations and are assisted by robots and 4.5km of conveyer belts.

Walmart, Asda’s parent company, is planning to replicate this facility across its operations in the US. 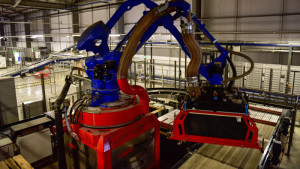 The site includes nine robotic cranes, which each control 27,000 individual pallet locations and are able to lift pallets as high as 27 meters.

According to the retailer, the warehouse has a one million square foot capacity because of the “unique way its robots can access stock.”

“Our Warrington site really is impressive,” said Roger Burnley, deputy CEO and COO, Asda. “Our colleagues do a fantastic job to ensure the depot works at its maximum efficiency to send product to stores across the North of England.”