The ribbon was cut by Bito owner Fritz-August Bittmann, who is also celebrating his 80th birthday. Digby Jones, former CBI director general, was guest speaker at the event.

Bito has been growing rapidly in the UK, and the new site is substantially bigger than the old location just across the road at the Hemdale Business Park.

The company specialises in static and dynamic shelving and racking, mezzanines, workshop equipment as well as on a broad range of plastic bins and containers. The new experience centre is designed to see the difference solutions in operation. 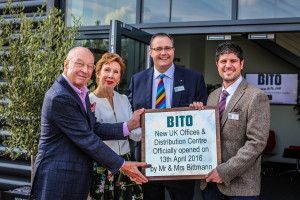 Mr and Mrs Bittman with Edward Hutchison and Jason Austin of Bito UK.

Edward Hutchison, managing director of Bito Storage Systems said: “We’ve seen constant growth on gross profit of over 20 per cent in the UK. This year in the first quarter we’ve accelerated to 40 per cent. We are growing, hence the expansion with the new premises and employing more people – we’ve extended our workforce by 20 per cent in the last 6 months alone and we plan to continue this growth, which the new facility will facilitate.”

The facility will double the company’s current stock holding capacity of for intralogistics solutions. Holding a broader range of stock – including Pallet Racking and Carton-Live in addition to a greater volume of fast moving stock items such as shelving, bins and containers – will ensure that more products are available on its Fast Track 3-day service.

BITO Group managing director Winfried Schmuck said: “What Edward and his team have created is fantastic and reflects BITO’s philosophy. BITO is 171 years old now and several generations of Bittmanns have created this company – always with honest, long-term thinking that is valid for customers and employees. BITO Group has reached a 200m Euro turnover and 220m Euro order entry through solid, profitable growth. We strongly believe in our people and core values of quality, service and long-term partnership. We created the UK subsidiary in 1999. In January 2001, Edward arrived and created a completely new company with a very solid business model – including the ability to order though a catalogue or online, delivering to all sectors operating logistics in the UK. Edward has created a fantastic ‘family’ here in terms of the team, who together have increased BITO UK turnover 10 fold in 15 years. I am looking forward to seeing this success story continue.“

Lord Jones said: “World class products, quality inward investment by a quality business into the World’s most successful economy, a Happy Big Birthday to the company’s owner – what a fabulous opportunity to celebrate so much that is good at a time when good news is in short supply. It is a privilege to be asked to participate in these celebrations and the company being longstanding major supporters of Leicester Tigers had nothing to do with it – well perhaps just a little bit.”