The winners of the FLTA awards have been revealed.

The winners are as follows: 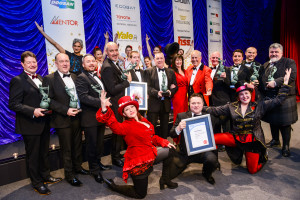 Supplier of the Year: IBCS

Peter Harvey, FLTA chief executive, said: “This year’s Awards raised the bar once again. It was an absolutely fantastic night and I raise my hat to all of our fantastic winners. There was a lot of stiff competition, so to break through such a strong pack is worthy of praise. Just being named a Finalist in these categories is an achievement in itself.”