There can be few operations more critical than the ambulance service – maximising the availability of ambulances and crews is vital. London Ambulance achievement in boosting availability was explained by Justin Wand, deputy director – fleet and logistics in the opening session of the Supply Chain Conference in London this morning. 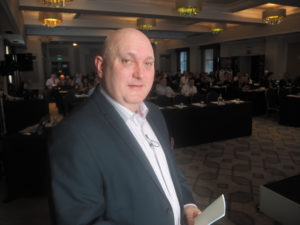 London Ambulance won the Supply Chain Strategy and Design Award in the 2017 Supply Chain Excellence Awards with project “Make Ready” that significantly improved the efficiency of the service.

Wand pointed out that London has a resident population of eight million and the ambulance service is the busiest in the world.

Activity grows by six per cent every year, said Wand, but the service was struggling with old infrastructure. “We used our most expensive asset, our staff, to clean and stock the ambulances.”

The patient experience starts with the preparation of the vehicle, he said. “A big focus for me was the hours we were losing.”

As well as using specialist teams to prep the vehicles, London Ambulance created a hub and spoke system with hubs aligned to hospital locations. These have also been aligned with maintenance providers.

It means that ambulance staff can now just get in the vehicle at the start of the shift and get on with their jobs.

Wand said that 99 per cent of ambulances that go through the process are now prepped to standard. He also highlighted the increased responsiveness of the system, and the ability to medications in the system.

He pointed out that at the Grenfell Tower fire last year, London Ambulance had over 100 ambulance deployed, and by following morning all but one had been replenished.

This organisation had tried to do this several times, pointed out conference chairman Richard Hunt, who is a former chairman of London Ambulance service. He highlighted the role of Justin Wand, who has a clinical background, in driving through the changes.

FatFace, the fashion retailer, created a customer focused distribution centre based on their e2e supply chain that helped it  grow 20+ different channels and to double its turnover. Not surprisingly it won the Warehouse Initiative award last year.

The company undertook lots of market research to understand its customer, their needs and expectations.

Rather than moving to Midlands, FatFace chose to stay close to its roots on the south coast. It built an 80,000 sq ft building, with space for another 40,000 sq ft. It has three mezzanine floors.

More stock is now held in the warehouse rather than the store and respond more flexibly to get the right product to the right place.

The Supply Chain Conference is taking place at the Grand Connaught Rooms in central London today and tomorrow.