Volvo’s truck ‘The Iron King’ has beaten the world speed record for both 1,000 and 500 metres standing-start categories. The truck had an average speed of 105mph and a time of 21.29 at the 1,000 standing start. 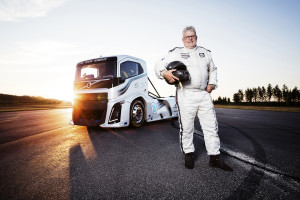 “This shows that our I-Shift Dual Clutch transmission has enormous potential and that it does not let you down under extreme conditions. The fact that the world record-breaker uses the very same gearbox that is found in our series-built FH trucks is something that we’re really proud of,” said Claes Nilsson, president and CEO of Volvo Trucks.

Boije Ovebrink was the driver behind the new world record. He has beaten five speed records in the past.