3PLs bought and leased 8.3 million sq ft of warehouse space by the third quarter of 2019, the highest level of take-up since records began.

Property consultant Savills said that there has been “little empirical evidence” of Brexit stockpiling, but did say that 3PLs could be seen to be capitalising on the continued uncertainty, taking space in anticipation of businesses looking to hold more stock within the UK.

According to Savills, take-up of industrial warehouse space (units of 100,000 sq ft +) is set to hit 33 million sq ft by the end of 2019, a 33% increase on the long term average. This is being driven by an increase in demand from a diverse mix of occupiers. 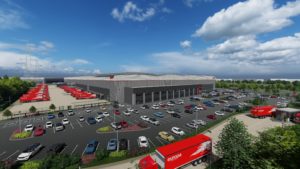 The growth of the online grocery sector has intensified in recent years with the rise of Ocado and competition from the likes of both Hello Fresh and Amazon Fresh. Consequently, take-up by food production, grocery retail and wholesale occupiers has grown, on average, by more than 400% in the last decade.

Richard Sullivan, national head of industrial and logistics at Savills, said: “The growth of the online grocery sector has put focus on an interesting sub market that has garnered little attention until now. Due to the shift in consumer habits when it comes to food in particular, we are likely to see an increase in demand for cold stores, both chilled and frozen. Because of their highly bespoke nature, this kind of space is rarely built speculatively so it will be interesting to see how developers respond to an uptick in demand.

“The food market has changed considerably over the past decade; bulk buying, discount grocers, convenience and ultra-convenience via delivery and trends such as veganism has led to longer, more complex, supply chains.”

According to the Cold Chain Federation, whose members are made up of those who operate frozen and chilled storage facilities, frozen food has grown year-on-year by 4.1% per cent, which will ultimately translate into demand for additional supply.

The Federation warns that not only will cold storage be crucial to limiting food waste, but as the earth gets warmer, but the number of temperature-controlled units will have to treble globally by 2050 in order to cope with levels of consumption.

Shane Brennan, chief executive of the Cold Chain Federation, added: “There is robust and growing demand for cold chain services in the UK. The problem is that the majority of facilities we rely on are old, inefficient and increasingly unfit for purpose. The next ten years will bring increasing energy costs, new carbon related taxes and tougher regulatory standards. This means that businesses across the supply chain must invest in refitting, rebuilding or replacing old facilities. The property sector will have a big part to play in helping to achieve this.”